Where in the world are Guyana's Hashers?

Click the link for a current world map showing all the places from which Georgetown (Guyana) Hash House Harriers are checking out this website. 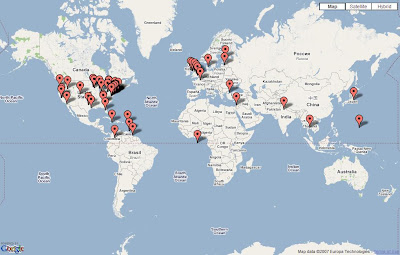 Posted by GuyanaHHH at 10:57 PM 3 comments: Links to this post 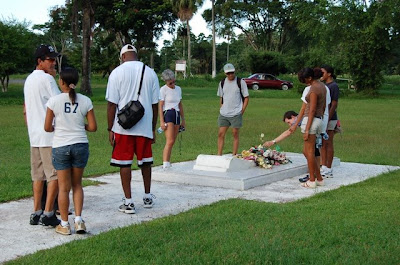 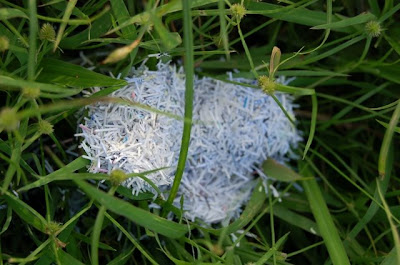 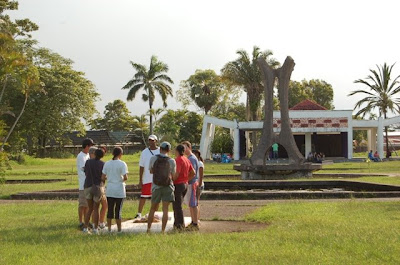 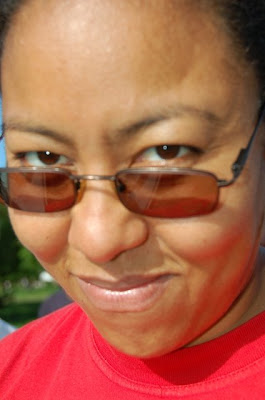 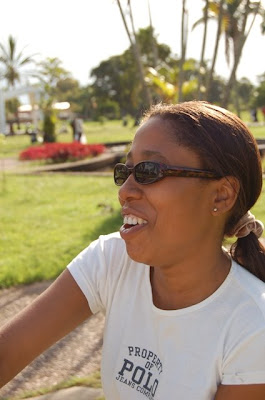 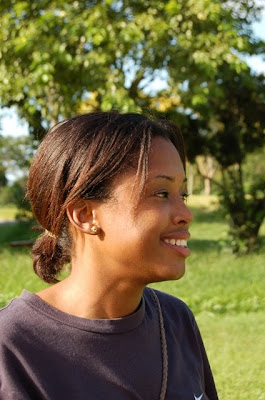 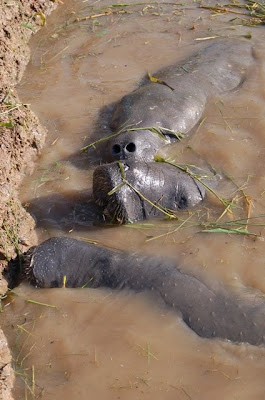 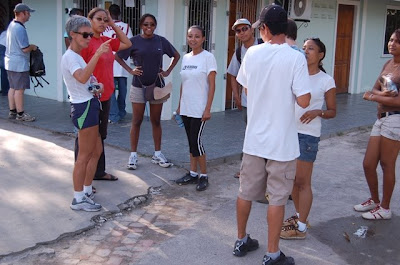 Posted by GuyanaHHH at 11:29 PM No comments: Links to this post

Email ThisBlogThis!Share to TwitterShare to FacebookShare to Pinterest
Labels: Georgetown

fficient Without Hares, there aren’t any Hashes. Every Hasher should be a Hare at least once or twice a year.

You can set a hash by yourself but it is a lot of work. Find a good looking member of whichever sex you prefer to help you set the trail. Make sure he/she/it is an experienced hare, physically fit and willing to pay for everything. At least one of you should have a vehicle or be willing to steal one.

A hash trail must include as many of the following as possible: mud, water (rivers, black water creeks, canals, trenches or an ice chest), jungle, hills, trees, bushes, brambles, hedges, long grass, cow shit. The point of hash is to have fun before, during and especially after the run. Trudging over cane or rice fields, whacking through dense brush, wading across caiman and/or piranha infested creeks, sludging through leach filled swamps, and struggling up steep sands hill only to be confronted with a stroll through a rubbish pile is considered fun by hashers - so let them have it with both barrels! One note here on private property - while most people don't mind a few hashers strolling across their cow pasture, they might object to us stomping through their flower gardens - get permission FIRST!!

Finding a good location for the Circle and On On is just as important as setting a good trail. Anyplace suitable for a lime will do. A good breeze to chase away mosquitoes if helpful. A good view is nice. Water is excellent, particularly if you warned everyone to bring swim togs or if you invited a bunch of aspiring models.

Drinks: Ask someone who knows what drink consumption has been at recent hashes, figure out how much is left over from the last hash, and buy what you need. Survival Supermarket is normally the cheapest/most convenient place to buy beers/softs. If you can’t find anyone who knows anything, get four crates of beer and one crate of Sprite.

Water: Ask Birdy Num Num if he can get water: Four dozen if its hot and dry; a lot less if its not. If Birdy Num Num can’t help, buy from Wieting & Richter ice factory at , .

Coolers: Pick up at least two coolers and any left over drinks at the run before your run, or find out who took them home and drink to rescue them before they’re drunk.

Ice: Call Clint, the ice man (611-4280). He will deliver chipped ice anywhere in . Convenient and cheap. Failing that, buy from the Wieting & Richter ice factory at ,

You have a GY$10,000 budget for food, crockery & cutlery. Anything extra comes out of your pocket.

Food: German’s Restaurant (owned by hashers Swampy and Bambi) frequently caters for in town On On’s and will deliver. They can also pack food for On On’s out of town. Give them at least three days advance notice. GY$10,000 flat price. Dutch Bottle Cafe is also owned by hashers, but is way too upscale for us.

Crockery & Cutlery: Find out who has them, pick ‘em up, and wash ‘em. Make sure you wash them after the On On too. Or buy paper & plastic. (Crockery update: the plates have gone missing .. buy paper or plastic)

Trail Markers: What you use to mark the trail is up to your imagination, just make sure it is biodegradable within the next few weeks ( for example extra-Cheezy Pringles Chips are NOT considered appropriate for marking trails - although I understand they do glow in the dark). Some materials commonly used include shredded paper, flour, toilet paper, red beans or orange lentils. If you need shredded paper, ask one of the hashers who pretends to work in an Embassy.

You really need to check out and map out your run before you actually set it. Do this the weekend before your run. Do it in your head, write it down or whatever it takes, just don't leave it to Saturday morning. See OBJECTIVES below.

#5 The Big Day: Setting the Trail

So here you are, ready to put paper to ground but, let's not be too hasty, why don't we just review the main objective here.

THE OBJECT IS... to set a good challenging ‘run’ that should take the pack 60 to 90 minutes to complete, whilst keeping most of our very diverse group together. What we want to avoid is having us strung out all over the countryside and having some walkers staggering back in three hours later. Rather than distance, concern your self with time. A general rule of thumb is that it should take you two to three hours to set the trail if you are walking and carrying a big bag of paper.

Remember: It's easy to set a totally confusing Hash (Hashers, as a rule, are not real smart you know); it's harder to set one that's challenging and fun. Most hashes are set in a circular route starting and ending in the same location, but they don’t have to.

Your Arsenal Of Weapons

The Dot: Dot, dollop, plop, call it what you like, this is your most basic marker. Use it to mark off the trail that you want hashers to follow. Three dots placed in succession along a trail indicate to hashers that they are on the right route. Once you have established the trail, continue to place dots at intervals along the route. Hashers, being a rather insecure lot, start to get nervous when they don't find paper along the route and are liable to wander about aimlessly if they're not encouraged along by the occasional dollop.

Alternatively, use paper ribbons tied to various bushes or trees in areas that shredded might get lost in (eg areas of white sand) or any area where residents may react strongly with weapons of minimum destruction (dogs, rocks, barbed wire fences, electric fences etc.).

A word on spacing - allow for a reasonable distance between dots. It's hard to say how much, 75-100 meters is OK but a kilometer is a bit much. And, context is important here. If you're on an established road or trail then you don't need them very often, but if you're crossing an open field, then you might need them every 20 meters. Use your good Hashing judgment (God, are we in trouble now!)

Checks, Re- Groups, False trails, etc. - this is the most difficult part of setting a good hash run. You must utilize all aspects of the geography of the trail, take into account the physical and mental fitness of the hashers and then try to screw up everybody as much as possible. The objective of these special marks on the trail is to keep the front running bastards confused and slowed down enough for the lazy-ass walkers to catch up. A few well placed checks and a couple false trails can accomplish this objective. Here is a list of some common marks, what they mean and how to set them properly.

Two dots - Check: this is the most common mark, used when there is a fork in the trail or an intersection and you want the front runners to spend about 5 minutes determining which way the real trail is heading. The next dollop of paper or ribbon may be placed anywhere within the next 300 feet on any or all of the many possible trail choices.

Three dots in a triangle - False trail: if you want to incur the wrath of front runners then put a few of these on your trail. The best place is at the top or bottom of a hill. The idea of a false trail is to get as many front runners as possible to expend huge amounts of energy running in totally the wrong direction. They will turn around (cursing you vociferously) and return back up (or down) the trail looking for the real trail. These marks are also used in conjunction with various "checks" described below.

X - Back Check: this check means for the runners to go back to the last normal trail marker and look for another trail in another direction. This mark is used by hares who find themselves in dead end streets or faced with angry landowners with a gun.

This was a run like Nine Lives used to set way back when!
But the wind and rain were so strong that I didn't get pictures of the really good parts.
Every Hash must cross a trench: 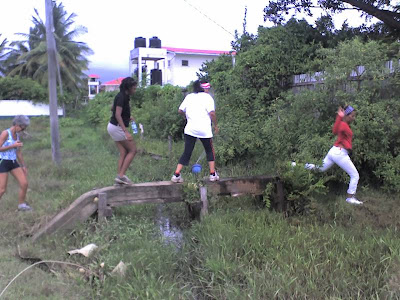 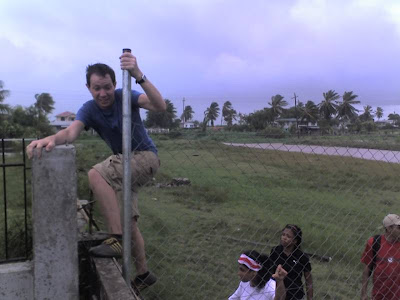 As y'all know by now, mud is mandatory: 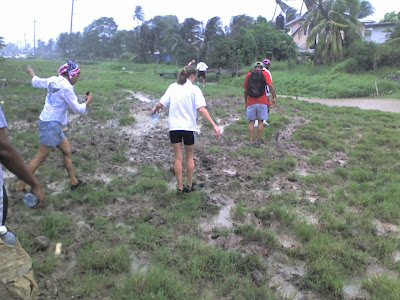 There was plenty of wind and rain, too.
Check out how the trees are blowin: 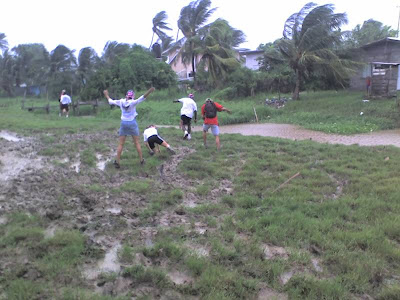 Swampy lost his shoes, but found them in the muck. I wasn't so lucky. 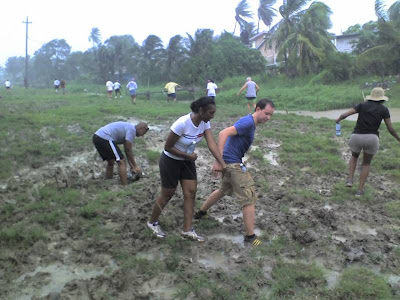 What's so tricky about this? 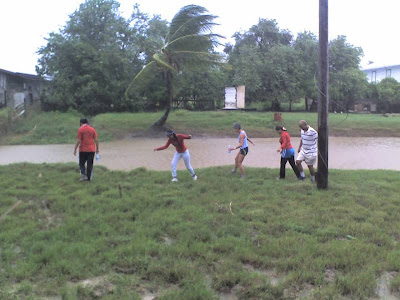 Where did his legs go? 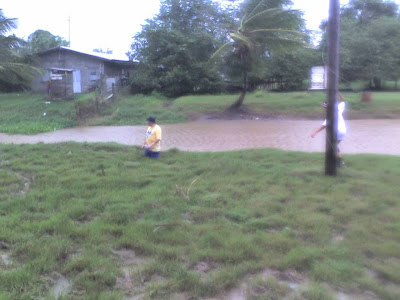 Finally, sunshine for the On In: 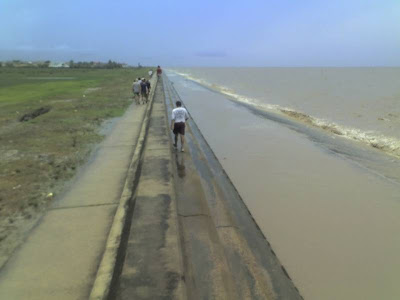 I've decided to throw my hat in the Mud for this weekend's Hash. The Hash will now be known as the Independence Day Hash. What this means is that you will not be permitted on this weekend's outing unless you find--and wear-- clothing that have the colors of the United States Flag(should I have to tell you what those colors are?:).
There isn't much time left but I'm hoping that an American can join the hares to celebrate this historic occasion. I'm also hoping that you American Hashers can send me some food and menu ideas.
And finally, We need an American to sing the National Anthem when we circle up at the down down.

On! ON!
Swampy
Posted by atypical HBS at 7:20 AM No comments: Links to this post