How To Set a Hash Run


Whilst setting a hash is similar the world over, there are local variations caused by a) where the originator of the particular kennel first started hashing, b) financial considerations, c) local customs, d) litter laws (how well they are enforced) e) terrain.

Here in Guyana, the Hash uses Shredded Paper (usually US embassy secrets, but sometimes UK High Commission secrets, and of late GUYSUCO secrets   ....  they really don't want people to know how they are wasting the money!), although flour may be used if the trail is mostly on road.  During wet season, the flour washes away, and in the bush, insects eat it, and the colour is normally too close to the colour of the surrounding sand.

In Georgetown and it's environs, a small amount of paper (half a handful) every other lantern post or even every 200 yards will suffice to mark trail.  Outside of G/T more paper should be used, since people tend to believe we are working black magic on them when they see us laying the paper, and tend to shift it.  Kids also have a habit of playing with the shreddies.

A single pile of paper indicates the trail for the hounds to follow, and as long as paper is laid at decent intervals and not too well hidden, the hashers will find and follow it.

Check points:  two piles of paper laid side by side will indicate a check point.  Check points a) make the trail more interesting b) cruel, c) evil, d) fun, e) and allow the tail enders to do some catching up.

Hares (those setting the run) should always indicate beforehand the number of people who must reach the check point, before the hashers are allowed to continue on .. note hares do not count in that number, they are not persons!!  Under normal circumstances 7 - 10 is a good number.  However, when in Jungle terrain, it is always better to increase the number.  The more people on the hash, the more it spreads out  .... the tail enders have been known to come on in about 1/2 hr after the front runners!!, so the more hashers, the more false trails, the better.

After the check point it is customary to have 2 or more trails going off in differing directions, with the first pile of paper being placed anywhere within 300yds of the check point.  Hashers are encouraged to call out "On On" when they encounter the paper piles.  this is especially important in bush since we run a very real risk of getting lost in unfamiliar territory.

Tit Check:  normally a circle of paper with a central dot, indicating that female members of the hash should go checking for the trail, whilst the men lounge around and watch the rear view of said female members as they go.

Dick Check:  a newly suggested check point that currently does not have a sign, where the male members must go look for trail.

The False Trail:  the false trail is any trail that is not the real one.  A false trail can be of any length (some have been 1 mile long), but must be clearly marked at its end by a false trail sign.

The False Trail Sign:  this is three piles of paper arranged in a triangle.  more paper is usually used for this sign than normal.  At the false trail sign hashers are supposed to call "False Trail" and return to the point where the check point was seen.

A hash trail can be of almost any length, but most commonly is between 3 and 7 miles long (including the false trails), although we have have a few 10 and 12 milers.
The trail may also be of any shape, circle and square being the most common.  Care must be taken to ensure that if the trail crisscrosses, there is no confusion between the on trail and the back trail.

In areas of agriculture, the trail should be kept away from plant beds, no matter how over grown they look ... those bushes might be food!!

A local guide is usually very useful if you are setting a trail in jungle that you don't know.  they may be able to make suggestions that will make the run more interesting (Chinese style interesting).

Food costs vary according to location, but in most cases should not exceed $15,000.00.

Beers, the life blood of the hash (Banks) can be purchased from any wholesaler, and the hash has a supply of bottles that is used to exchange ... regular Banks bottles are recycled and a deposit is paid when you purchase beer without the bottles.

Please ensure that all regular banks beer bottles are returned to the Dicktator.

The normal meeting place for the G/T hash is in front of the British High Commission as being the most central point for every one (but mainly because the first Guyana hashers were British!!!).
Time of meeting depends mainly of where the run will be held.  The further away it is, the earlier the meeting.

Of late, most hashes have been held on Sunday, because most of the local hashers work on Saturdays, but this is not set in stone, only as a convenience.

Note: a new hare will usually be paired with a veteran hare.  Again not set in stone, but it works out better since the vet knows how to set trail, and the newbie may have new trail ideas/locations.


Now that you have been given the salient points about setting a hash run, get out there, volunteer and set one!!!!

Well, everybody's clothes survived Merissa's onslaught more or less, and everybody got to the on on intact...  yay hash!

picture for this post would be appreciated, since the Dictator did not go on this run, sending the grand mattress in his stead.

The next run will be up in Linden, hosted by the Linden branch of the peace corps.

2 weeks saturday  meet at the BHC pm    details to follow.


Posted by GuyanaHHH at 1:19 PM No comments: Links to this post

Deaf Lesbian has kindly given us these pictures to add to our collection. 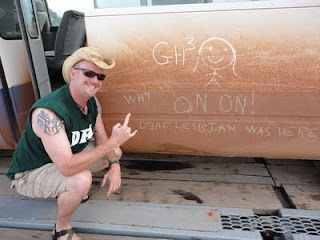 The first is of a prat who decided to show us what a great artist he was, on the side of the bus that took us to Omai.  Obviously by the way he spelt deaf he was dyslexic!!!! 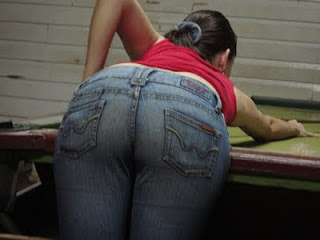 The second I am not sure about.  Does anyone recognise that face?
Posted by GuyanaHHH at 1:11 PM No comments: Links to this post